US wants Tibetans not Chinese to select the next Dalai Lama

After recent 'warnings' from China, the US President Donald Trump signed a bill into law that calls for building an American consulate in Lhasa and checks Beijing’s interference in selecting the reincarnated new Dalai Lama.

Amid recent discussions on stimulus and defense spending bills that were approved by US congress and went to US president for his signature was the Tibetan Policy and Support Act of 2020 (TPSA).

The new law bars the United States from opening new consulates in China until it is allowed one in the Tibetan capital Lhasa and authorizes funding to groups that promote cultural preservation, education and environmental sustainability in the Himalayan region. The law also calls on United States tol impose sanctions on officials "who directly interfere with the identification and installation of the future 15th Dalai Lama of Tibetan Buddhism".

This is a significant move as America undergoes political transition and a new president and his administration are slated to shape the foreign policy. As expected, the move has not gone well with the Chinese. An editorial in China’sstate-owned Global Times said

The aim of US meddling in Tibet-related affairs in recent years has been sought to contain China's international rise. Besides, the trend to internationalize the Tibet question has changed according to China-US ties. During this process, both US Republicans and Democrats make own maneuvers, while Democrats are relatively more skillful at playing the Tibet card.

Promoting the internationalization of the Tibet question was believed to be one of the most effective leverages by US anti-China forces. Such moves peaked at the end of the 20th century and the beginning of the 21st century. During that period, Western anti-China forces followed the US' lead in terms of the Tibet question - they sympathized with the Dalai Lama and his followers.

The International Campaign for Tibet, an advocacy group close to the Dalai Lama, hailed the passage of the law as laying "a marker down on the global stage declaring that the international community will not accept China's interference in the Dalai Lama's succession and will oppose China's human rights abuses in Tibet for as long as they continue." 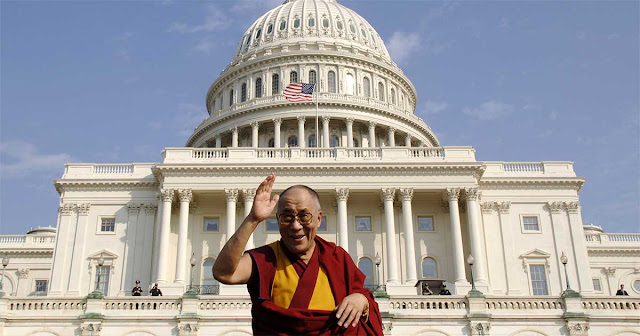 After the failed uprising in 1959 in Tibet, the 14th Dalai Lama was forced to flee to India. A Tibetan government-in-exile was set up in Dharamshala in Himachal Pradesh.

The aging 14th Dalai Lama, has slowed down his once frenetic travel schedule is keenly aware that China may attempt to appoint a titular successor. The Nobel Peace Prize winner has mused about appointing his own successor.

History made again! President Trump signs the Omnibus bill, which means the Tibetan Policy and Support Act of 2020 is now LAW! https://t.co/GtFFyx0SGM