PESHAWAR, Pakistan (AP) — Pakistani police arrested at least 31 people in overnight raids after a Hindu temple was set on fire and demolished by a mob led by hundreds of supporters of a radical Islamist party, officials said Thursday.

Meanwhile, dozens of Hindus rallied in the southern port city of Karachi to demand the rebuilding of their place of worship.

Local police said they detained 31 people overnight and Thursday’s raids and more raids were underway to arrest radical cleric Maulana Shareef and other individuals who participated or provoked the mob to demolish the temple.

The attack happened after members of the Hindu community received permission from local authorities to renovate the temple. According to police and witnesses, the mob was led by Shareef and supporters of Pakistan’s radical Jamiat Ulema-e-Islam party, Angered over the attack, about 100 members of the Hindu community rallied in Karachi. Among them was Ramesh Kumar, a member of the National Assembly, the lower house of Parliament. (read the rest on AP) 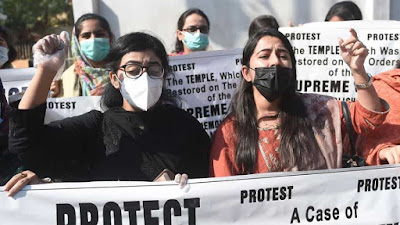 India lodges protest with Pakistan over Hindu temple’s demolition (HT) - India has formally protested with Pakistan regarding the recent vandalisation of a Hindu temple in Khyber Pakhtunkhwa’s Karak district, people familiar with developments said on condition of anonymity on Friday. “The matter was taken up officially with the Pakistani side and a strong protest was lodged,” one of the people said.

Mob attacks and sets ablaze a Hindu temple in northwestern Pakistan Story by Reuters - Hindus are the largest non-Muslim religious group in Pakistan, which gained independence from British rule in 1947, when the subcontinent was partitioned into Muslim-majority Pakistan and Hindu-majority India. Videos made by locals at the scene and shared with Reuters showed a crowd breaking apart blocks of the temple structure's walls using stones and sledgehammers, as dark smoke from a large fire billowed into the sky.