COVID-19 in India: fact-check, and looking beyond headlines

Here is a look beyond a topics making headlines and a few facts.

Headline : "India is struggling to vaccinate its people against COVID-19"

India is indeed struggling to vaccinating a nation of 1.3 billion... but think of the scale and success thus far 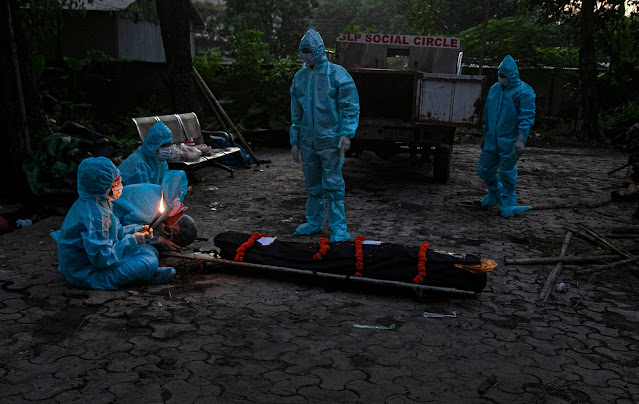 Ganga and Yamuna have historically been among the most polluted rivers in the world. Manmade pollution includes bodies and human remains from scores of burning ghats along the river banks.  As per this article "Old Photos of Dead Bodies Floating in Ganga Passed Off as Recent"

Headline: Indian Government is grossly under-reporting the cases and numbers

Reporting COVID-19 cases, recoveries and even deaths is not a precise science. Almost every country struggled with this issue
United States: According to CDC, 578,945 Deaths in US
China: Official figures put the number of COVID-19 deaths at 4,636

The Aurangabad bench of the Bombay High Court, earlier this month while hearing bail plea of two accused booked for sexually assaulting a 17-year-old girl, expressed displeasure over the acts of father of the victim of “donating” his daughter to a “baba” (godman), by executing ‘daanpatra’ (deed of donation). The Aurangabad Bench of the Bombay High Court took strong exception to the act of a father "donating" his daughter to a baba while hearing the bail plea of accused for sexually assaulting the 17-year-old. [Shankeshwar @ Shambhu s/o Bhausaheb Dhakne and Anr. v. State of Maharashtra & Anr.]  "When the girl as per her own statement is minor, then why the father who is in all respect guardian of the girl should give the girl as Daan ? A girl is not a property which can be given in donation," the Court remarked. The two applicants for bail was accused of sexually assaulting a minor girl, who lived with her father in the temple premises where a Baba lived with his
Read more

A few months ago, Mark Zuckerberg brought metaverse into the forefront of buzzy tech by rebranding Facebook to Meta and expounding his vision for Horizon Home, an early vision for a home base in the metaverse. Even before dust settled on the Connect 2021 announcement , a middle aged American couple Dave and Traci Gagnon jumped the bandwagon by planning the  "world’s first"  wedding in the metaverse. Perhaps taking a leaf out of Gagnon’s playbook, an Indian couple from the state of Tamil Nadu is scheduled to hold their wedding reception in the metaverse, inviting guests to login in virtually from around the world. Dinesh Kshatriyan and Janaganandhini Ramaswamy plan to host their reception in the virtual dining room of Hogwarts castle.  In a tweet announcing this move , Dinesh said I feel so proud and blessed that I have seen and taken advantage of many great opportunities in this world before millions of people have seen them, Beginning of something big! India’s first #metave
Read more